Mahatma Gandhi quotes: Mahatma Gandhi, the father of our nation, needs no introduction not only in India but in the whole world, almost everyone knows about him. He was such a person who defeated the British without taking up arms and got India independence. Today I am telling you about more than 100 priceless thoughts of this priest of truth and non-violence which can prove to be helpful for you. Let us know how the thoughts of our Father of the Nation, who were counted among the greatest human beings in the world, were. (Famous Quotes of Mahatma Gandhi) 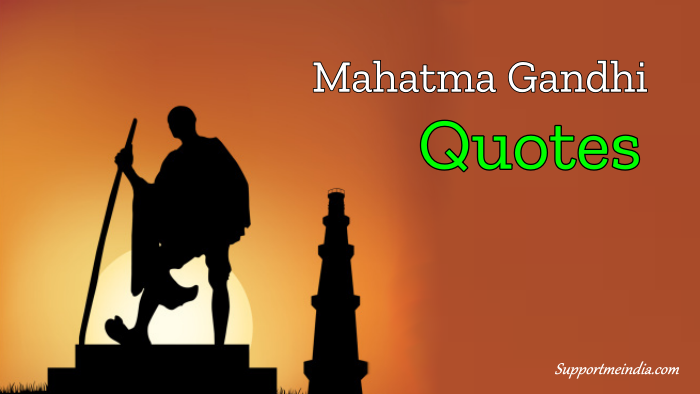 Mahatma Gandhi was born on 2 October 1869 in Porbandar, Kathiawad, Gujarat, who was elected the first Father of the Nation of India, his birthday is still celebrated on 2 October. Mahatma Gandhi is considered to be the architect of the freedom struggle, who gave freedom to India and inspired all the citizens and rights of the world to the movement for freedom.

I would like to tell you something similar about the thoughts of Mahatma Gandhi, which will definitely help you and through which your life can become successful. He had always followed non-violence and truth, due to which he is worshiped in our country India to date.

Life is available to everyone and one day everyone has to die but I would tell you that if we have got life, then live it in such a way that when you die, the whole world remembers you, die by doing something so that everyone remembers your name. You have not got this life to work hard for your family or for yourself. Don't waste it yourself, you will have to make a difference in this so that the world recognizes you, because of you, millions of people can be helped, this should be the real purpose of your life.

These 100 priceless best quotes of Mahatma Gandhi can change your life, if you find these quotes inspiring, then do share them with your friends on social media.

If you are a student and you want any speech on the occasion of Gandhi Jayanti then click here.

If you get inspiration from Mahatma Gandhi quotes then definitely share them with your friends on social media.

Related Posts for You

This is a Hindi website, where we share helpful information for beginners, you can find here "what is... in Hindi?" articles and learn something new everyday. ♥